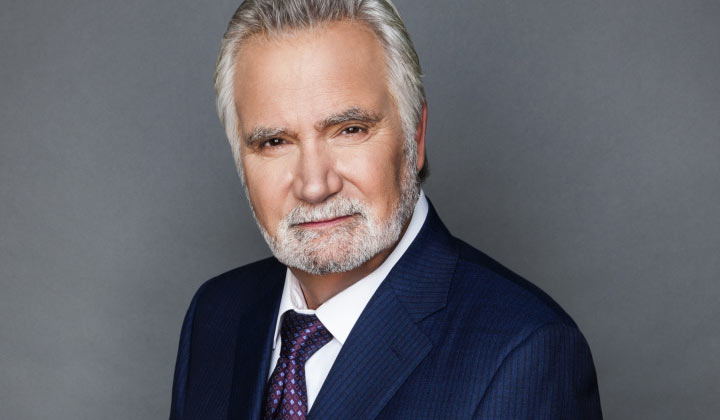 Eric has been leaving the office for hours at a time, sleeping in a separate bedroom, and leaving his Viagra bottle out for Stephanie to find and take inventory of. It's like he wants to get caught.

I can't even believe I typed those words. Watching on Friday made me feel like I was watching some wacky 70's sitcom. If this is the best the substitute writers had to offer, thank goodness the strike is over and the 'first team' is coming back to work. So, between those antics at the sleazy love nest and the mother-daughter tag team sniffing around Nick, gee....I hardly know where to begin.

You would almost think that Eric WANTED to get caught in the act with as obvious as he has been about something else going on behind the scenes. Leaving the office for hours, not sleeping in the same room with Queenie and leaving his Viagra bottle out for Stephanie to find it and take inventory. Maybe he doesn't care too much if Storm goes to the Big House but the Logan sisters will certainly have plenty to say about that. Stephanie will now give Brooke the ultimatum about dumping Ridge to save him next. But what I find so amazing about this farce is that Eric really doesn't seem to think Stephanie will go through with it anyway. His attitude has been a little more relaxed about it than I would have liked and now when he's caught, quite literally, with his pants down, I wonder what he'll say? How convenient, too, that Storm is back in LA. I thought he was supposed to stay in Europe with Stephen to get help. Hmmmm....

And who uses the name 'Rocky' for a detective? Did anyone else laugh when they heard that? I did. And could a son have a more uncomfortable conversation with his mother than the one Ridge had? 'Gee...Dad has some pills missing? Ewww...too much information, Motherrrrr.' Yes, it's nice I suppose for a good looking man in his later years to have some fun but do we have to SEE so much of it all in one week? Yikes...I felt like I was watching my grandfather get it on. No, no, no...he needs to get his clothes back on and deal with the Harpy head-on (no pun intended). Stephanie can't force him to love her and the writers will have to deal with this a little better and with more realism. Stephanie has not been such a great wife and he has taken about all a man can take...time to move on and start focusing on some other characters.

Well, the kiss seen 'round the world sure stopped abruptly, didn't it? It just stopped on Monday and that was it. Yet, Rick seemed to have no regrets and left the mansion looking like the cat that ate the canary. Taylor, on the other hand, looked a little dazed and confused about what happened. I couldn't tell if she actually enjoyed it or not. I'm thinking she did and yet I hope not. I don't know...this was just such a curveball that I still can't wrap my mind around that potential coupling. To me that could be nearly a seemly as Brooke and Deacon...after all, Rick was just chasing (literally) Taylor's daughter Phoebe around LA! How would she feel about Rick making time with her Mother? Could this be the turning point for Taylor's character? Could she be channelling her arch-nemesis, Brooke? Will she give up being the smart and classy Taylor to become the sexually crazed hot mama Taylor that sleeps with 20-somethings? Stay tuned...

Speaking of Brooke, could she be any more wishy-washy? If she loved Ridge so much she would have married him already and told Nick to pound sand. But NOOOOOOOO....we more tortured weeks and even months coming of the unrequited love between Nick and Brooke to suffer through. Suffer, you ask? Hey, I'm the first to say I thought they were the hottest couple on this show EVER but now it seems so watered down and the writers have made Nick into such a chump that I wonder if they actually got together if it would be the same. I know one thing, though and I will say this forever....Jack Wagner and KKL are so believable and seem to have such a great time shooting their scenes that it makes KKL's scenes with Ronn Moss look like they are in traffic court together. BORING.

Something else, while I am firmly in 'gripe' mode, I hate about all of this is how quick Nick is to use the baby to get her back. That's exactly what Brooke has been doing to Ridge for months. And if I hear 'We share a child together' one more time, I'm going to throw myself in front of a bus!!!!!!!!!!!!!! Maybe these two are really meant for each other. Using a kid as a wedge is cheap and classless. But now to have a guy doing it? Ugh. And how about all the 'cake-eating' going on? Brooke can't have it both ways...she can't be hanging around to help Nick raise baby Jack and still be married to Ridge and raise that brood with him. Pick one and stick with it, woman! I say pick Nick...she is 'in love' with him and her kids like him better anyway! 'Daddy Ridge' is no fun...no pirate dress-up, no cool boat, and no sense of humour.

And what's going on with Bridget? Her character is the worst and last week proved it yet AGAIN. She's starting to get that 'Single White Female' scary stalker thing going on, too. The glazed over expression when she's around Nick...the slightly psycho look when Nick said he kissed her Mother...yeah, he'll have trouble with that one for sure! Why would a writer have her be so unhealthy as to still be in love with a man that has dumped her twice for her mother? And where is her pride? GET A LIFE!!! God...it's almost painful to watch as a female. She keeps coming over and making it obvious she wants to be with him again and he's so clueless as to not see how much worse it makes it when he hugs her and says she'll always be 'more than a friend'. WHAT? HELLO!!!??? What's next? Felicia coming over and offering to give Jack his first piercing? I wonder if baby Jack knows he's such a chick magnet for Dad.

Since it was Valentine's Week and romance was in the air, I asked my readers to tell me who was B&B's most romantic couple over the years and I was not at all shocked by the answers. The majority said Nick and Brooke, followed by Ridge and Brook and a few votes for Macy and Thorne. That was a pleasant surprise as I agree they were a cute couple through all of their ups and downs. I asked myself why, though, Nick & Brooke seem to have that on-screen chemistry that Ridge and Brooke don't. I think the actors have a lot to do with it and if I had to guess I would say that KKL and Ronn Moss might be pretty bored with their scenes as of late. And Nick's character is SO different than Ridge's that maybe that is what lights the screen on fire when he's with her. I know I have always seen it and I have been watching since the beginning. I am hoping for the best with this latest baby nonsense and their latest professions of love for each other, who knows?

This week's question: Has the 'Ridge & Brooke' signature romance on B&B lost its luster with you? Are they washed up as a couple and why?

Rory thinks: 'The most romantic couple for me it's Brooke and Nick. They shared very romantic moments, both as a couple and as a family, with Brooke's kids. And they're love is still tormented, which makes it even more romantic.'

Kim says: 'I have never responded to any of your questions, but really do enjoy your column...but i just want it on record that the most beloved couple was either Thorne and Macy or Thorne and Darla...their love was so sweet and they sure did make it look easy compared to the rest of the bunch, that can't stay faithful to save their "%@. you know....but I will tell you that I stopped watching the show when Brooke slept with deacon for a while..that was more then gross...it was morbid...'

Linda from Jersey proclaims: 'Hi gf, guess what couple I am going to say...You got it, Ridge and Brooke.'