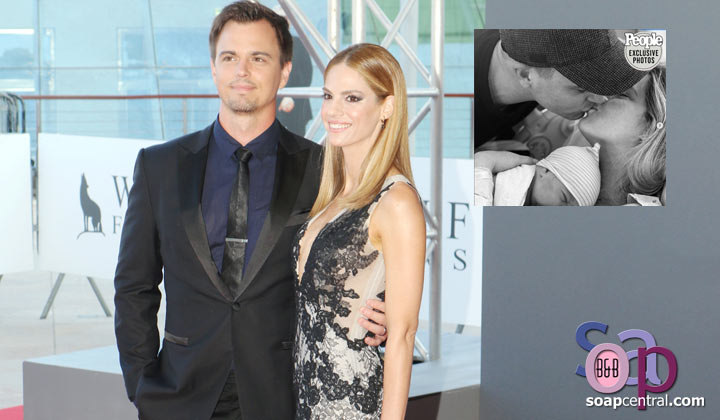 Darin Brooks and Kelly Kruger are parents for the second time. The real-life soap opera couple welcomed daughter Gemma Wynter over the weekend.

Real-life soap opera couple Darin Brooks (Wyatt Spencer, The Bold and the Beautiful) and Kelly Kruger (Mackenzie Browning, The Young and the Restless) welcomed their second child together over the weekend.

"Thank you to @kellylkruger, the rockstar, for letting me have another one with you (so glad this one takes after you too), and Thank you to all our family and friends who have helped us through the crazy process of having a baby during a pandemic," Brooks shared in an Instagram post. "Love you all! And please join me in welcoming this little [diamond] and badass #3 (K, E and now G) into the world!!! Oh, and yes... Now I'm severely outnumbered."

In a statement to People, Brooks, 37, said, "We are just overjoyed! We couldn't be happier! We always wanted a sibling for Everleigh because I have my older brother and Kelly has an older brother and two stepsisters."

"I can't wait to see her little personality and who she becomes," Kruger, 40, added. "Becoming a mother for the second time is definitely more emotional because we now know what to expect with everything. It's truly such a miracle and such an incredible journey."

How did the couple decide the new baby's name? According to the pair, Gemma and Wynter were their top two choices. When they asked their daughter, Everleigh, which name she preferred, the two-year-old would always reply, "Gemma Wynter."

Brooks and Kruger got engaged in Paris back in 2014. They were married in Hawaii in 2016.

Kruger has been playing the role of Y&R's Mackenzie Browning on-again, off-again since 2002. She also makes occasional appearances on B&B as a publicist named Eva, a role she's played since 2014. Her additional credits include A Very Corgi Christmas, Blue Mountain State, Reboot Camp, and The Bold Type.

Brooks joined B&B in 2013. His previous credits included Blue Mountain State, Bloomers, Miss Behave, and Days of our Lives, where he earned a Daytime Emmy for playing the role of Max Brady during his 2005 to 2011 stint with the NBC soap.

Would you like to send congratulations to Darin and Kelly? We want to hear from you -- and there are many ways you can share your thoughts.

About The Actor: Learn more about Darin Brooks.
Who's Who: Read a biography of Wyatt Fuller.
Family Trees: Scan the many branches of the Forrester family tree.