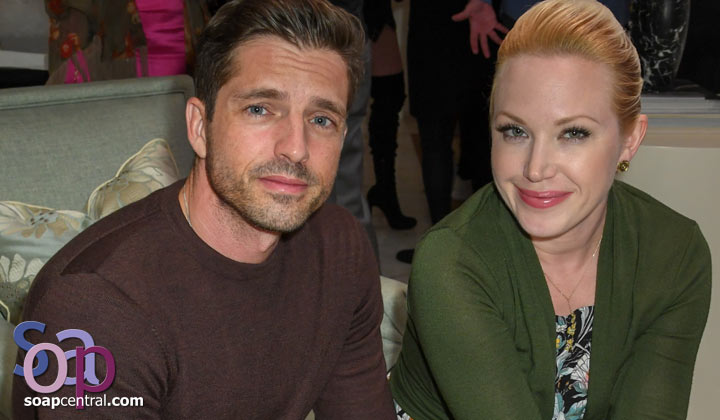 There were some complications, but baby number three is here for Adrienne Frantz (ex-Amber Moore, The Bold and the Beautiful/The Young and the Restless) and Scott Bailey (ex-Sandy Foster, Guiding Light). The soap alums, who also appeared on the Days of our Lives' spinoff, Beyond Salem, proudly present Killian Lachlan Bailey.

Congratulations are in order for real-life soap pair Adrienne Frantz (ex-Amber Moore, The Bold and the Beautiful/The Young and the Restless; ex-Sophie Faversham, Days of our Lives: Beyond Salem) and Scott Bailey (ex-Sandy Foster, Guiding Light; ex-Miles Faversham, Beyond Salem), who are thrilled to share that they have welcomed their third baby, a boy who they've named Killian Lachlan Bailey.

Frantz was due to deliver her new son in early March, and the exhausted mom shares that she was slow to post about his birth because she experienced some complications, followed by the family catching a mild sickness from her firstborn.

"Meet my angel Killian Lachlan Bailey! We're all in love with him!" the actress shared on Twitter. "It's been a tough couple of weeks. I had some complications & Amélie brought a bug home from school! You don't know what it's like to be a mother of 3 until you have 3 sick babies!"

Meet my angel Killian Lachlan Bailey! We're all in love with him! It's been a tough couple of weeks. I had some complications & Amélie brought a bug home from school! You don't know what it's liketo be a mother of 3 until you have 3 sick babies!#newborn #babies #proudmama #inlove pic.twitter.com/mZ4kX7RmGa

Frantz doesn't share any details about the complications she faced during Killian's delivery, but it's a relief that everything turned out okay -- especially because it isn't the first time that she and Bailey have experienced complications while welcoming a child into the world. The couple's parenthood journey has come with a lot of tough moments, including two miscarriages, fertility treatments, and surgeries before the arrival of their firstborn daughter, Amélie Irene, who was born in 2015; then, Frantz faced post-pregnancy difficulties right after welcoming the couple's son, Lion, who was born in 2020.

Back in January, the actress told Soap Opera Digest that she was in extreme pain after the birth of Lion, and doctors found that she had a bowel obstruction. "I had to have emergency surgery and my kidneys had already shut down, plus other organs were shutting down as well. I went into congestive heart failure and I spent 10 days in ICU," she shared.

"I remember lying in the hospital room and thinking, 'I'm never going to see my kids again.' I knew if I fell asleep that night, I would never wake up. So, in the middle of the night I called my best friend, Marissa Tait [ex-Becky, B&B]... and I told her she needed to be on the phone with me so I wouldn't fall asleep, and she was, for the rest of the night," the actress recalls. "I finally started to feel better and I'm lucky to be alive."

Frantz and Bailey shared the news of their third pregnancy in an October Instagram post celebrating their tenth anniversary as a couple.

"Happy 10th anniversary to my best friend, love of my life, matesoul @scottbaileyofficial," Frantz wrote with a photo that showed her growing belly bump. "These 10 years have flown by! I love every amazing adventure! I love our kids and the one on the way! I can't wait to meet him! I love you! Cheers to 100 more together!"

Bailey shared the same photograph along with the caption, "Happy #10yearanniversary to my soulmate, partner, wife and the love of my life! 10 years flew by and I still can't get enough!! Here's to ten, twenty, a hundred more!! I am beyond grateful you said yes ten years ago and I am thrilled to be part of this growing family we are creating! All my love forever soulmate."

Bailey played the role of GL's Sandy from 2004 to 2006. After leaving the CBS soap, he starred in shows such as Saints & Sinners, Kamen Rider: Dragon Knight, Here We Go Again, and The Bay.

The couple appeared together in the 2019 horror film The Thing That Keeps You, the 2015 Lifetime film The Perfect Girlfriend, and the 2021 Peacock miniseries Days of our Lives: Beyond Salem.

Would you like to congratulate Scott Bailey and Adrienne Frantz on the birth of their son, Killian? We want to hear from you -- and there are many ways you can share your thoughts.