Ashley Jones returns to The Bold and the Beautiful; is Bridget here to stay?! 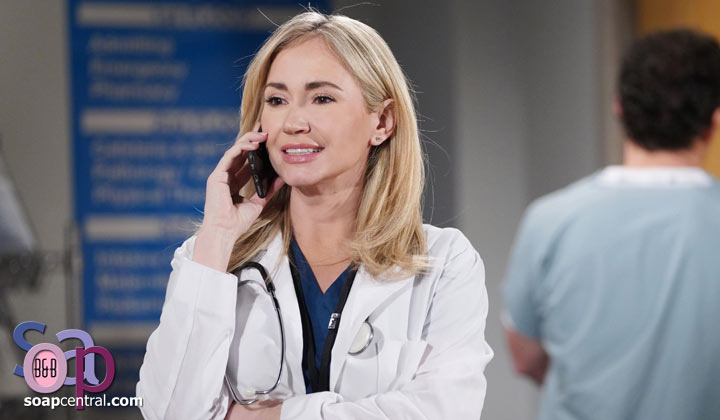 Surprise! The Bold and the Beautiful has brought Ashley Jones back as Bridget Forrester, and this time, it might not be just a one-off appearance!

It's always great when Ashley Jones pops back onto The Bold and the Beautiful for guest appearances as her beloved alter ego, Bridget Forrester, but a lot of viewers have wanted the actress to return to the CBS soap opera full time. Could their wish finally be coming true?

Fans were thrilled to see Jones make a surprise return as Bridget during the Thursday, March 31, episode, and word on the street is that she might be sticking around in Los Angeles for an extended period of time this go-around!

In the March 31 episode, Bridget revealed that she was working at University Hospital in Los Angeles "to help with restructuring and shortages."

B&B is currently on hiatus and has yet to release any details about Jones' return, including whether or not she's back for a long stint -- or even possibly on contract?! But if the actress is back for awhile, there certainly won't be a shortage of storylines for the writers to play with.

Bridget is connected to most of the major players on the canvas in one way or another, and fans have been especially intrigued to see the character return now that Deacon (Sean Kanan) is back in town: when Bridget was married to Deacon in 2002, she was blindsided by the news that he was having an affair with her mother, Brooke (Katherine Kelly Lang), which resulted in Brooke's pregnancy with Hope! (Editor's note: actress Jennifer Finnigan was playing Bridget when the shocking mother/daughter affair storyline played out.)

In a recent interview with Soap Central, Kanan said there is still a lot to explore about the trio's complicated history. "I just read a tweet about [B&B creator] Bill Bell having said something to the effect of, 'Conflict is the essence of what we do in daytime,' and anytime there's a way to introduce some new conflict into my story and into the overall palette of the show, it's a good thing," the actor shared. "Bridget coming back after all these years would certainly introduce some conflict, whether it awakens some old feelings, or if it's that she can now, as an adult, finally tell Deacon in no uncertain terms how what he did hurt her, and Deacon apologizing, who knows. But it certainly is fertile ground for a lot of good story."

Jones agrees that it would be fun to dive back into the Bridget/Deacon/Brooke history. The actress made a surprise appearance in a January episode of the online program Bold Live and expressed, "This is the first time it makes sense, like really, really makes sense... for Bridget to come back." The actress added that "there is just so much to explore."

RELATED: Winsor Harmon opens up about a possible long-term return to B&B

Jones got her start in the soap opera world as The Young and the Restless' Megan Dennison, which she played from 1997 to 2000. She joined the cast of B&B in 2004 and has played Bridget on-again, off-again since 2004. Jones is also known to daytime fans for her 2016 to 2017 role as General Hospital's Parker Forsyth, a professor who developed a romantic connection with her student, Kristina (Lexi Ainsworth).

In addition to soaps, Jones has appeared on series such as True Blood, All Rise, Major Crimes, and 90210, as well as films like Saving My Daughter, You Killed My Mother, Good After Bad, and The Wedding Ringer. She recently launched a jewelry collection and has served as a guest contributor at Parenting magazine.

How do you feel about Ashley Jones returning to B&B? What do you hope the writers have planned for Bridget? Would you like to see the show re-explore the Bridget/Deacon/Brooke trio, and if so, in what capacity? We want to hear from you -- and there are many ways you can share your thoughts.