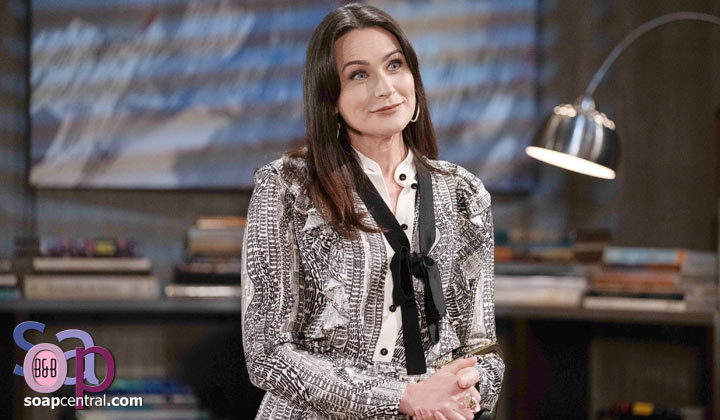 The Bold and the Beautiful's Rena Sofer reveals that she's back in the shoes of her troublemaking alter ego, Quinn Fuller, and she urges fans to "stay tuned!"

It's been a hot minute since fans of The Bold and the Beautiful saw actress Rena Sofer on-screen as her Los Angeles alter ego, Quinn Fuller, but fortunately, that's about to change!

The actress took to Instagram with an update for fans that reveals her spring break is over, and she has happily resumed her soap gig after she and her family spent time on the East Coast, attending college tours with their youngest daughter.

"Back to the real world," Sofer wrote. "I can't believe we will be sending her off soon and will be empty nesters. How time flies."

The actress added that now that the family is back home, she has time to make new pottery pieces, and she is "making more havoc for everyone as Quinn on Bold & Beautiful so stay tuned..."

According to official show teasers, Quinn will be back on-screen really soon: she and Carter (Lawrence Saint-Victor) take a walk down memory lane on Tuesday, April 19, and then, on Wednesday, April 20, Carter gets Quinn to make an admission of her feelings.

As for what comes next, that's anybody's guess. Carter has been pretty busy with Paris (Diamond White) lately, and Eric (John McCook) hasn't been a huge part of storylines in recent weeks -- but all of that could change at a moment's notice!

Sofer has been playing B&B's Quinn since 2013. Her previous soap credits include playing Joyce Abernathy on Another World, Amelia "Rocky" McKenzie on Loving, and Lois Cerullo on General Hospital. Her non-soap credits include 24, Melrose Place, Ed, Covert Affairs, NCIS, Heroes, and Blind Justice.

Are you happy to hear that some B&B scenes featuring Rena Sofer's Quinn are just around the corner? What would you like to see for the character this spring and summer? We want to hear from you -- and there are many ways you can share your thoughts.