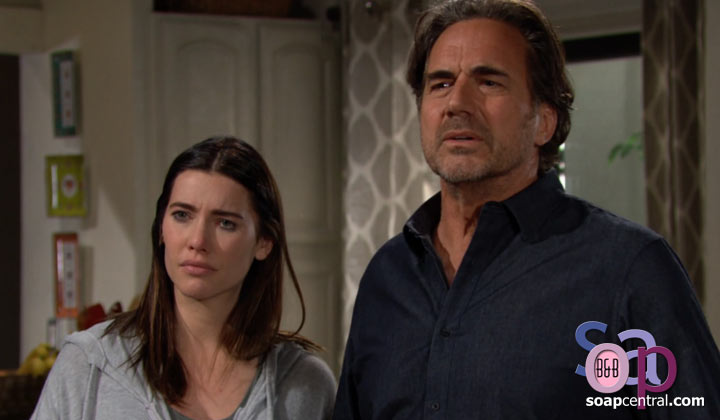 RECAPS FOR OTHER SOAPS

At Brooke's house, Brooke scoffed at the idea that Sheila would actually believe she'd be welcomed into Steffy and Taylor's family. Deacon remarked that Taylor seemed to be the peacemaker in the family, and it might be a new beginning for Sheila. Hope wondered if there was more to the story, and Deacon said that Taylor and Sheila had bonded.

Brooke laughed and called it ridiculous. Deacon told Hope and Brooke that Sheila had saved Taylor's life. Later, after Deacon recounted the details of what had happened between Sheila and Taylor on the rooftop, Brooke found it to be incredible that Sheila, who was more likely to take a life, had actually saved one.

Brooke asked what exactly Deacon's relationship with Sheila was, and he joked that Brooke was jealous. Brooke asked why he kept defending the terrible Sheila. He reasoned that people said the same thing about him, but he guessed that Hope and Brooke didn't think he was so bad. Hope replied that he wasn't like Sheila.

Deacon asked if there could be a better tribute to Finn than letting Finn's mother into the family Finn had left behind. Brooke admitted that she felt bad for Sheila's loss. Deacon replied that it only took one person to reach out. "Well, it can't be me. It can't," Brooke stated. Brooke asserted that even if she wanted to, Ridge would never allow Sheila into their lives.

Deacon confessed to being jealous of the way Brooke defended and supported Ridge, who was in the house with Taylor. Hope said Ridge was in the guesthouse, but Deacon said it was still too close. Brooke stated that Ridge had left because Brooke had betrayed Ridge's trust "with you." Deacon was sorry for it. Brooke said she didn't blame Deacon; it was her own fault, but after all that time, she still didn't know what had made her drink.

At the cliff house, Ridge and Taylor were outraged that Sheila blamed Steffy for Sheila's actions in the alley that fateful night. Sheila explained that Finn had jumped in front of a bullet. Steffy said the bullet had been meant for her. Sheila replied that Steffy had refused to let Sheila take her rightful place in Finn's life, and therefore, Finn's blood was on Steffy's hands. "He'd still be alive today if it weren't for you," Sheila seethed.

Ridge asserted that Sheila had put a bullet into her own kid. Taylor was disillusioned because she'd given Sheila a chance, despite warnings, to prove she was capable of love and being in the family. Contending that she was capable, Sheila brought up how grateful Taylor had been when Sheila had saved her life. "But the whole time, you knew!" Taylor screamed. Taylor said Sheila had known she was the reason Steffy had been fighting for her life. Taylor concluded that Sheila was "the same heartless bitch" she'd always been.

Ridge said he'd thought he'd known what Sheila was capable of, but he hadn't imagined she'd shoot her son in cold blood. Sheila asserted that she hadn't meant to do it. "That's how you justify that? You were trying to kill somebody else? What the hell is wrong with you?" Ridge raged. Sheila uttered that none of it would have happened if Steffy had given Sheila a chance to prove herself. Steffy claimed she had, and Sheila had proven herself psycho.

Sheila claimed that the night was hazy in her mind, but in her view, Finn had suddenly been where he shouldn't have been. She said it had been too late, and she hadn't been able to think. Ridge thought she'd been thinking enough to stage a robbery. Sheila replied that they acted as if she'd planned it out, but she'd merely been reacting.

Ridge yelled that Sheila had left his daughter to die in an alley, and Taylor added that Sheila had arrived at the hospital with her fake grief. Sheila replied that Taylor had seen how terrible Sheila had felt, but Taylor responded that Sheila had felt that way because she'd murdered her own son. Taylor accused Sheila of lying to everyone and playing Taylor for a fool, acting like the grieving mother and grandmother when Sheila was actually responsible for Finn's death.

Ridge told Sheila that she was sick. Sheila asked if it was sick that she'd wanted a place in Finn's life and to see Brooke finally lose to Taylor. Taylor and Steffy asked what Brooke had to do with it. Sheila said Brooke had taken Ridge from Taylor and Steffy. Sheila claimed she had been trying to right a wrong. Sheila told Taylor, "You have no idea how far above and beyond I've already gone for you." Steffy said no one knew what Sheila was talking about, but Sheila said Steffy did.

Sheila said she'd just wanted to be a part of the beautiful life Finn and Steffy had created, but doors had been slammed in her face. Sheila stated that Brooke had hurt her, but Steffy had hurt Sheila the most. A flashback played of Steffy yelling at Sheila in the alley. Sheila said Steffy had refused Sheila a place in Finn's life. Sheila asked how she should have reacted to that.

Sheila said she would have forgiven it if Steffy had given Sheila an inch of compassion; however, Steffy had instead chosen to defend Brooke over Sheila. Taylor asked why Sheila kept talking about Brooke, and Sheila told Steffy to tell her parents.

Steffy experienced a flashback of talking to Sheila about the secret Thomas had been keeping about Brooke and the bottle labels. Gasping, Steffy said Brooke hadn't been able to make sense of her drinking out of nowhere. Steffy said it made perfect sense because Sheila had sabotaged Brooke and set her up to drink on New Year's Eve.

Steffy didn't remember it all but said it had to do with switching bottles. Ridge asked if Sheila has switched Brooke's non-alcoholic champagne with the real thing. Sheila admitted to switching the labels. She said she'd done it for his family. Sheila stated that Brooke and Steffy had threatened her and told her she wouldn't have a place in Finn's life. While Sheila had had to put up with Steffy due to her status in Finn's life, Sheila had refused to let Brooke judge her. Sheila said it had been insulting and none of Brooke's business.

"You made my wife drink?" Ridge asked. He figured everything that had happened after that had been because of Sheila. Sheila said she'd wanted to give Ridge and Taylor back what Brooke had stolen, but the events afterward had been all Brooke. Sheila claimed she'd been trying to help and said Ridge could just ask Thomas.

Taylor said Thomas would never keep what Sheila had done from his parents. Sheila replied that he had because she'd been bringing his parents back together. Steffy stated that Sheila was right, and Steffy had overheard him on the phone with Sheila. Deciding he'd deal with Thomas later, Ridge asked what was wrong with Sheila for playing with people's lives.

Ridge recalled that Brooke hadn't been able to figure out why she'd done what she'd done, and she'd concluded that she was just a horrible person. Ridge said it had been Sheila all along, and Sheila didn't deserve to live. He stated that no one would forgive Sheila for what she'd done to them all. He wanted Sheila locked up, and he asserted that he'd make her suffer every chance he got.

Steffy asserted that there was a "special place in hell" for Sheila, and that was where Sheila would go after she died in prison. Steffy declared that Sheila's reign of terror ended that day.

On the next The Bold and the Beautiful...

• Get a sneak peek with The Scoop's previews and spoilers.

• Miss an episode? Get caught up with our Daily Recaps Archives.

• Share your thoughts about the show on our message board.