Back in top form! 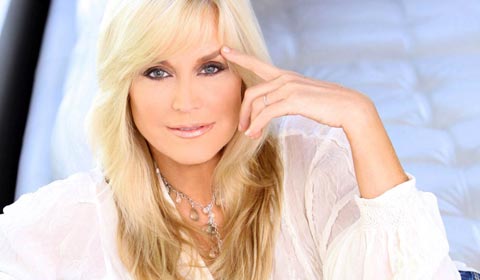 Waiting for the moment this past week when Lindsay confronted her daughter's killer behind bars was a great television moment.

What a difference a year makes! For the week ending May 27th, OLTL ranked SECOND in Nielson household ratings scoring a 3.0/10 and tying with The Bold & the Beautiful. The Young and the Restless is ahead of both shows with just a 4.0/14 ranking. At first glance, one might attribute the ranking (which isn't actually much higher than its typical ratings in the high 2's) to the apex of the Daniel being exposed storyline, but there are surely many other reasons which make this show exciting and eventful.

1. I would be remiss if I didn't include as the first item the exciting aftermath of Daniel's being exposed to the entire town on live television that he is both an alleged murderer and homosexual. In a world that has become filled with an obsession over reality television, this was an interesting and current way to tell the story. Nonetheless, the excitement didn't just end with that; seeing Nora, Riley, Lindsay, Bo, Rex, and everyone else in town react to the news made for must-watch TV every single day. Waiting for the moment this week when Lindsay confronted her daughter's killer behind bars was a great television moment. It still baffles me beyond words why the show's top brass feel it's beneficial to lose the talented Catherine Hickland as Lindsay Rappaport. Her performances since the death of her daughter have been of the highest caliber; she is one of the most talented actresses on all of daytime television, and not keeping her on contract is just plain foolish! But I digress. Each person, one by one, came by Daniel's cell in due order to give him a piece of his/her mind---Riley, his son who is confused and bitter over what his father did; Nora, who wants an annulment and seems to have found the loophole into obtaining one, even if Daniel refuses to sign the papers; Lindsay, who grabbed the slimeball by the hair and threatened him with what he deserves; Bo, who continues to express his disdain with the creep who married his ex-wife; and Mark, who at first vowed to stand by his man 100%---until he replayed a conversation in his mind that took place the night Daniel killed Jen---then, Mark put two and two together to figure out that Daniel was indeed guilty. It's ashame that Riley is on his way out this week, and Daniel is soon to leave the show later this month. Although it's doubtful Daniel could ever be redeemed after this, I still think the ramifications of what he did could play out in other stories for a long time with his presence still on the canvas.

2. The reunion of David and Dorian has been THE BEST! I rarely ever react out loud to the television set when I'm watching any show; however, when David asked for his ring back from Dorian after she was determined to make amends with David, I was bummed. I thought that this agony of watching these two apart would continue to go on to the point of extreme frustration---for both David and Dorian and for us! But, he turned the tables by taking the ring and asking Dorian to marry him. That is when it happened! I actually (I'm not kidding about this!) threw my hands up in the air and yelled "Yes!!" If ANY show can make me do that, it's an accomplishment, so kudos to OLTL for doing the impossible! These two have remarkable chemistry, and Robin Strasser and Tuc Watkins are set perfectly against one another!

3. The introduction of Spencer, David's brother, has also been intriguing to watch. Paul Satterfield brings a great charisma and "it" factor to the show as he immediately clicks and shares a strong rapport with every actor/actress on the show. His initial scenes with Blair and Todd have been good fun to watch, because despite Todd's miraculous decision to fess up to Blair about his being raped by Margaret, he still is the same insecure and jealous Todd we all have come to know! I think he would make a fantastic spoil to Kevin and Kelly's newfound love. Kelly has become such a stronger and more independent woman, and I'm anxious to see what happens when a new suitor comes along to sweep her off her feet! Furthermore, I'm quite eager to see why there is a rift between David and his brother. Why hasn't David ever mentioned Spencer before? And what is the connection between Spencer and Paige? There are sure to be some juicy skeletons in this closet, and Dena Higley has done a great job of introducing this new character somewhat slowly and by integrating him with a lot of different characters rather than just the one core group with whom he'd be sharing story. Good job!

4. It isn't until I saw Asa again that I realized just how much I missed seeing him! Having Renee and Duke "held hostage" in Argentina is great fun! Even though we all know Carlo Hesser will be part of the unfolding drama, it's been intriguing to see what plans Asa has up his sleeves. Running away after keeping Blair from her family was just vicious and wrong, but seeing the old coot come back with his cowboy hat on and revealing that mischievous smile brings back the Asa of the old days---Mr. Manipulation!

5. I just read an article somewhere which indicated that Jess's story involving Tess was originally supposed to wrap up this summer, but I'm telling you---I really like Tess a lot! I enjoy the sassy, sarcastic, and sexiness that Tess brings to Llanview. It's refreshing from the bland form of Jessica that we've endured for years now. Bree Williamson deserves a lot of credit for making me sit up and pay attention to that role now. She no longer just "blends in with the crowd"---she's now someone I stop to pay attention to when she appears on screen. This is probably why the execs decided to extend Tess's stay long beyond the summer and even cast a boyfriend for her. I'm also interested to see if losing her baby years ago is really the impetus for this D.I.D. or if it's something else.

I could continue to rave about the John/Evangeline/Natalie triangle, the Killing Club murders, and the continued clash between Viki and Dorian, but what it all boils down to is that Higley is not putting all of her eggs in one basket. The show has done that before, and it hasn't paid off. Finally, there is a balanced show that incorporates humor, suspense, and excitement. There is mystery and scandal mixed with a little bit of love and family. It's a show worth checking out again, and that is why it is being propelled to the top of the heap. Who would have thought that there would be a day when OLTL would be ABC's top-rated soap?

Now for your homework... a few weeks back, I asked you to visit the Message Boards to discuss your favorite OLTL villains. For those of you who checked this out, it was really great fun and a wonderful trip down memory lane. There were so many old villains (Austin Buchanan, Michael Grande, and others) whom I totally forgot about! This week, I'd like you to share what you think makes OLTL the #2 rated soap opera! What improvements have been made since Higley has taken over as Head Writer that has pushed this show to the top of the charts? I'm interested in having you all share these ideas with people in the message board area. To share your thoughts, please click here to visit a very special discussion thread on our message board where you can share your thoughts and ideas with me and other OLTL fans. I'll be sure to pop in myself to offer comments as well. Look for me as SOC_Ryan.