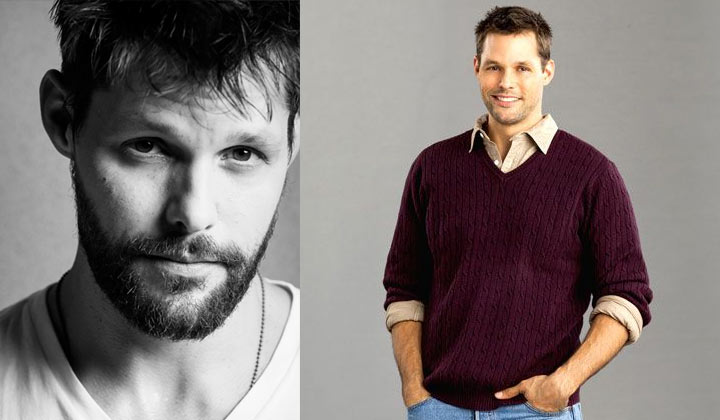 The entire jail fiasco was absurd. There is no way the police would have allowed a camera, recorder, and James in a cell to set up anyone, plus those sleeveless shirts that James and Seth had on were definitely not typical jail issue. Just another vehicle to show off those muscles on James. Instead of trying to show beefcake, better writing and plots are what's needed.
This week's Two Scoops columns

The entire jail fiasco was absurd. There is no way the police would have allowed a camera, recorder, and James in a cell to set up anyone, plus those sleeveless shirts that James and Seth had on were definitely not typical jail issue. Just another vehicle to show off those muscles on James. Instead of trying to show beefcake, better writing and plots are what's needed. This was the worst -- first off, none of this would be admissible in court, nor would it hold up for any charges to be filed. It's a shame that Brooke had to be part of this stupidity. As a top-notch journalist, she knows better.

Brian Frons (ABC Daytime President) apparently has decided to get rid of daytime women over the age of 40, hence Marcy Walker being released from All My Children and Ilene Kristen being taken off contract over at One Life to Live. I've heard only Susan Lucci is "safe" on AMC. What a mistake this is. We sure don't see the men over 40 being dropped just because of their age. Rumors have Julia Barr (AMC) and Catherine Hickland (OLTL) leaving by year-end. Does ABC not get it? These are talented, wonderful actresses that should be showcased. The fans don't mind that these ladies aren't 25 anymore. Much of the audience is over 25.

Suellen's Fan Spotlight of the Week writes: "I really miss scenes with Opal and Palmer and why haven't they gotten together yet? Since OLTL is taking Ilene Kristen off contract, why not have her be the one to find out about the baby napping/baby switch scheme and blow the whole thing wide open? She could crossover to Pine Valley, expose the whole thing, then take up residency and open a beauty salon with (or compete against) Opal. It would be a gas to have her and Opal vie for Palmer's affections. Then we would see who the queen of style is!!!" Since Opal is over that magical/dreaded 40, I doubt we'll see much of her anytime soon.

Everyone is suspicious of JR, and Bianca isn't buying his lies. The revelation of all this is sinking in for Babe, who realizes all her own lies were for naught. Now with James being stabbed and JR's lies out in the open it will be war between Adam and Tad. Both will do whatever it takes to protect their sons. Forget the law and what's right and wrong.

Zach is just an unpleasant guy. What with trying to poison David, spying on everyone, and wanting Edmund to endure some more heartache, it seems he's going to be quite powerful in Pine Valley. I don't think it's going to be a good powerful though.

Ethan has shown up in Pine Valley claiming to be a Cambias. There is no proof and no DNA ability. Now we all know that once Miranda is "discovered" to be alive, then there would be DNA capability. Since Ethan is from England, I guess he'll be related to Aidan and, by default, Anna. I don't believe this was ever mentioned back on General Hospital. Speaking of the Cambiases, I understand that Michael will be showing up again for about three shows in September. No, he won't be alive, but various nightmares will persist.

Erica is over her nightmare and out of rehab. Now she'll be able to fix her relationship with Jackson and Bianca in record time. How long before she's reconciled with Kendall? Yes, Kendall has spun out of control as she is obsessed with Ryan. Even though she was with Ethan only briefly, I saw some chemistry there. Ryan certainly plays the obnoxious, self-righteous gift to Pine Valley to the hilt.

Bobby tries to confess all to Anita, who says none of it matters and promptly proceeds to kiss Aidan. What a welcome home! If we are to believe there are no accidents in soapland then logic tells us that Aidan and Anita will be together before long, which would leave an opening for Bobby and Greenlee. It was good to have Aidan back.

Unfortunately, with all the shakeups going on, it doesn't appear they are benefiting the long-time viewers. Apparently there will be another crossover story between OLTL and AMC with a murder mystery that will bring Michael Easton (ex-Port Charles-vampire and current Detective John McBain on OLTL) to Pine Valley. I enjoyed his acting while he played the dual vampire/priest role during his PC tenure so maybe he'll add some sparks. More new characters and younger actors are being added, while our favorites are being put out to pasture. It makes no sense and is not helping the ratings as they fell back to 2.7 last week.
Mary