The five men nominated in the Outstanding Supporting Actor shared several things in common: among the commonalities, none had won previously in the category, and all five have turned in extraordinary work that was anything but supporting.

Billy J Miller, who submitted this year's longest Emmy reel among all nominated performers, was awarded for his work in an It's A Wonderful Life-styled episode. Miller's character is shown how Genoa City would be different if he were not around -- and ultimately learns that his reckless behavior will one day kill him. 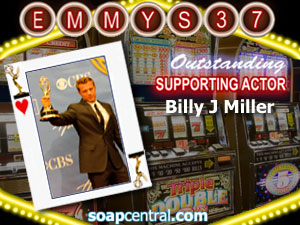 In total, Miller's Emmy reel clocked in at over 32 minutes, about the same length as the combined total of the reels of the other four nominees in the category.

"People asked me if I was nervous about this nomination. Well, yeah -- because of what it represents," Miller explained. "It's a tangible representation that if I have any talent at all, it's because of all my friends that I have made, from AMC to Y&R. You have a piece of my heart. Your hands have been on my shoulders, you've made me your family, and like any son of any family, I just wanna make you proud to have me among you."

Backstage, Miller seemed to have a hard time wrapping his head around his Emmy win.

"I went to film school and got to touch one of these. I was a videographer or something," Miller said with a reflective glance at his Emmy. "I was surprised to win. Bradford Anderson? C'mon. These guys are great. I'm really relatively new to the soap game. I'm in my third year -- one year at AMC and two years here [at Y&R]. I got lucky."

Miller also took some time to personally thank one of his co-stars: his on-screen brother, Peter Bergman.

"I get to work with great, legendary actors. Peter has helped me personally," Miller stated, noting that Bergman had helped him secure his job on The Young and the Restless. "He said 'I'd like have this kid have the job.' He is like an older brother. He's a great man."

A long time coming. That's how Julie Pinson described her very first Emmy win. The actress, a 13-year veteran of Port Charles, The Young and the Restless, and Days of our Lives had been nominated just once previously for a Daytime Emmy.

"It's been a long time coming, let me tell you," Pinson commented as she accepted her Emmy. "I would first of all like to thank all of the other ladies in this category because we all work so hard, and I think we all deserve this. So a shout-out to you chicks out there. And [As the World Turns executive producer] Chris Goutman, wherever you are, I love you. Thank you so much for my job. I know you tell me not to say that, but it's the truth -- I am here because of you." 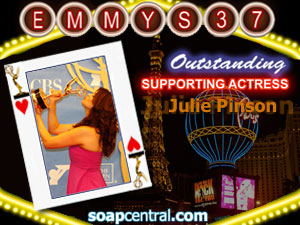 "It's an amazing, amazing feeling. I haven't felt anything this amazing since... well, last night," Pinson remarked suggestively in the pressroom. "I'm humbled and I'm gonna miss As the World Turns. I think that I am standing up here because Chris Goutman gave me this amazing character of Janet Ciccone two years, and Michael Park, my acting partner, who I didn't get to thank because that clock goes really flippin' fast."

"I had this whole beautiful thing set to say about my husband. How cute he is, and how great he is, and how good in bed he is... Well, anyway. I wasn't able to say any of that. And my husband has one [Emmy] at home already, so now they get to play together. His will be lonely no more."

The Emmy for the Outstanding Supporting Actress was the first award handed out during the telecast. The category featured three first-time nominees, and none of the nominees were previous Emmy winners.

Share this story with friends, family or the world.

PRINTABLE VERSION View a printer friendly version of this article